I recently decided to give Firefox OS a try and ordered a Flame developer reference phone. This post and the ones following will be an attempt at a blog series capturing my first 30 days of usage. I will do my best to blog as frequently as I can, usually once or twice a week as I get more accustomed to the new platform.

Why a Firefox OS-based device?

I have been a long-time Android user (and recently an iPhone user by accident). I own a Samsung Galaxy S I phone which I have been successfully patching to the latest Android version using Cyanogenmod. During the years, however, I have owned all the successors to the original Galaxy S. My wife owns a Galaxy S4 mini and seems happy with it.

Although in the past patching has worked reasonably well, recent versions of Android are too demanding of the ancient hardware I was using. This prompted me to look around for a new phone. After a lot of soul-searching, I decided I don’t want yet another Android-based phone. I was ready for something new, open and extensible.

I still have an HP TouchPad lying around the flat which dual-boots into Android and webOS. I believe web-based OS’es that embrace open and modern technologies are the way to go. So… what options do I have?

As soon as Mozilla made the announcement, I knew I wanted to own a Flame device. It’s a mid-tier phone which runs the latest Firefox OS. An OS that I might actually like… and with prices as low as £100 it’s a great value for money.

If you haven’t seen the specs, here’s a quote from the announcement:

A word of caution

The Flame phone as ordered from Everbuying ships from Singapore (manufactured in China). If you are shipping to a EU member country, your order may be subject to import taxes. Depending on where you live, you may also need to provide proof-of-payment as the supplier will likely declare your order as ‘no commercial value’ (which is a red flag for customs). Bring your PayPal receipt or wire transfer papers with you.

Right, let’s get on with it, shall we? 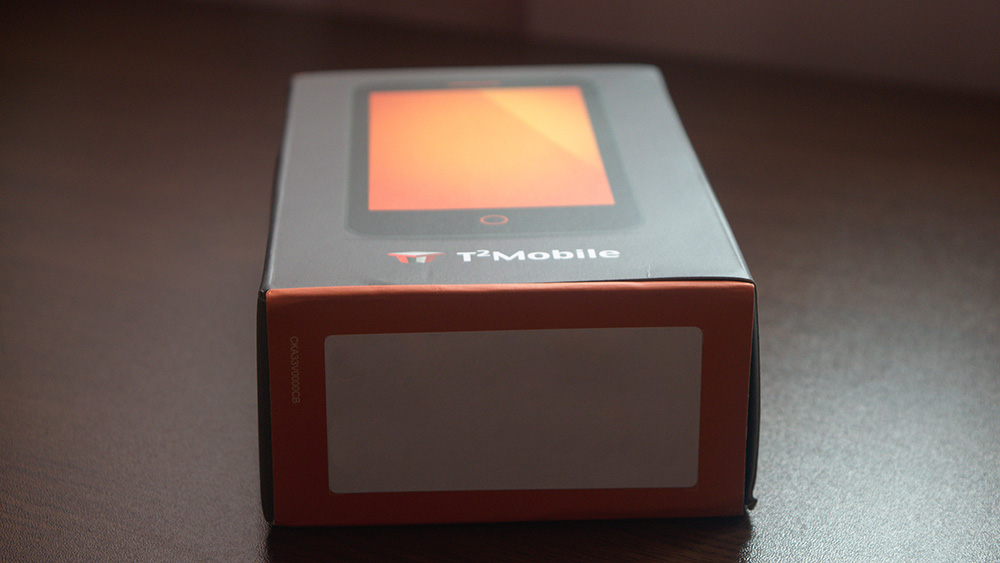 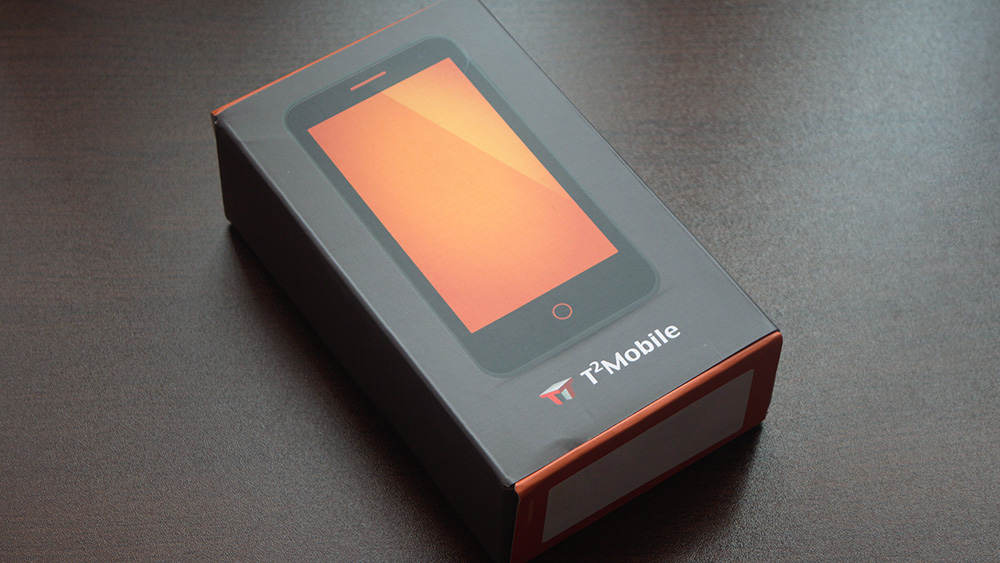 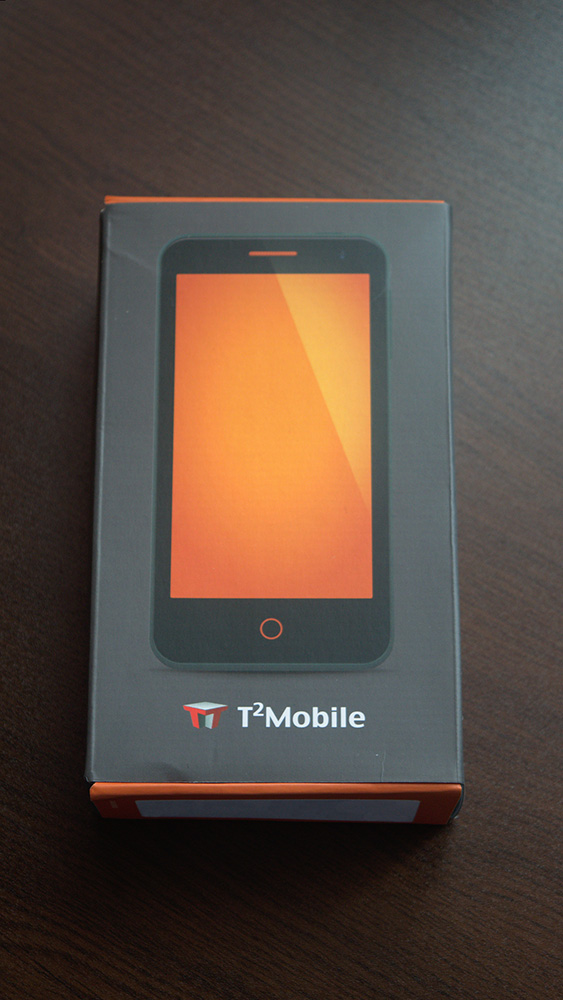 As the phone arrived, it had the T2Mobile logo at the front. Wat?

Mozilla worked closely with T2Mobile in creating the phone, which offers developers a means of configuring the RAM of the handset using the phone’s software so they can emulate a variety of Firefox OS devices that will be released throughout the coming year.

T2Mobile will also be charged with rolling out the software updates of Firefox OS, and even offer you a means of trying out different release channels, so that you can even install nightly builds right from your device.

The box itself is nothing to marvel at. It’s plain, it’s simple and the only interesting element to it is the orange screen of the phone illustration. It also feels very light. 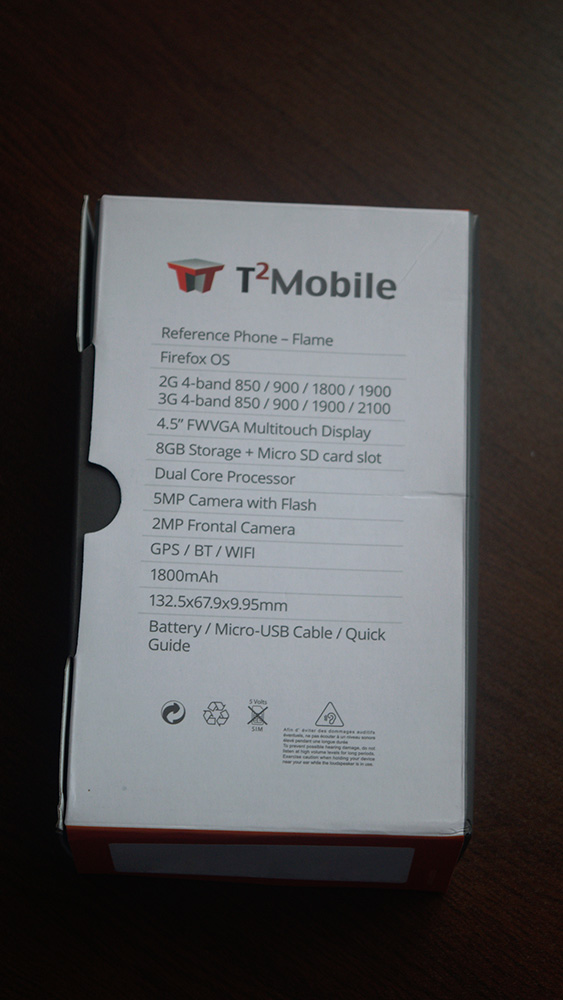 Once you turn the box, the back reveals the phone specs and what’s included in the box. 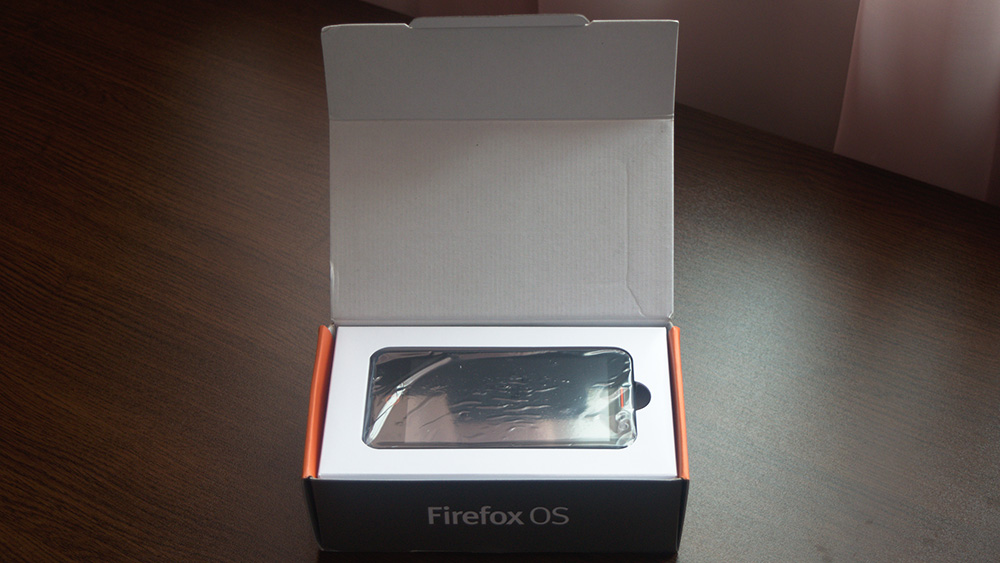 The box opens and reveals the front of the phone. Nothing fancy here, you’ve got your screen protective cover that peels off and an access to the bottom half of the box. 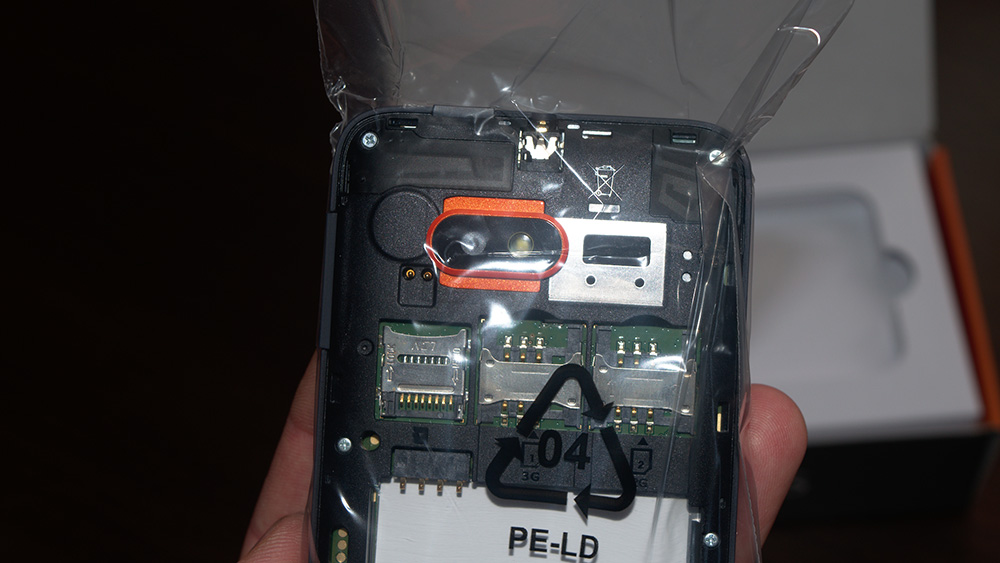 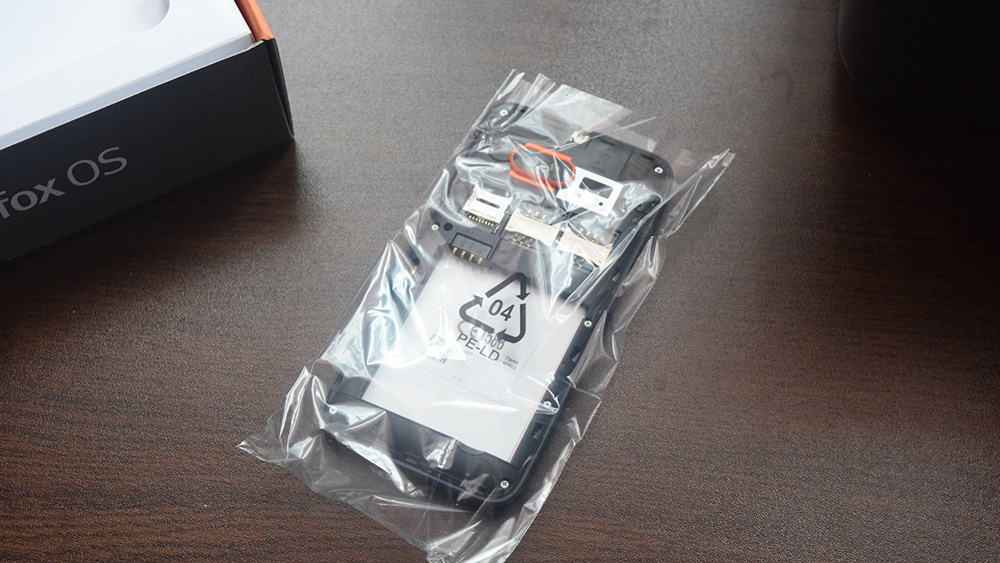 The back of the phone reveals a slot for an SD card and two SIM cards (2G+3G). The phone OS itself allows you to choose which one will be used for calls, mobile data, etc. The battery is not inserted into the phone at this point. 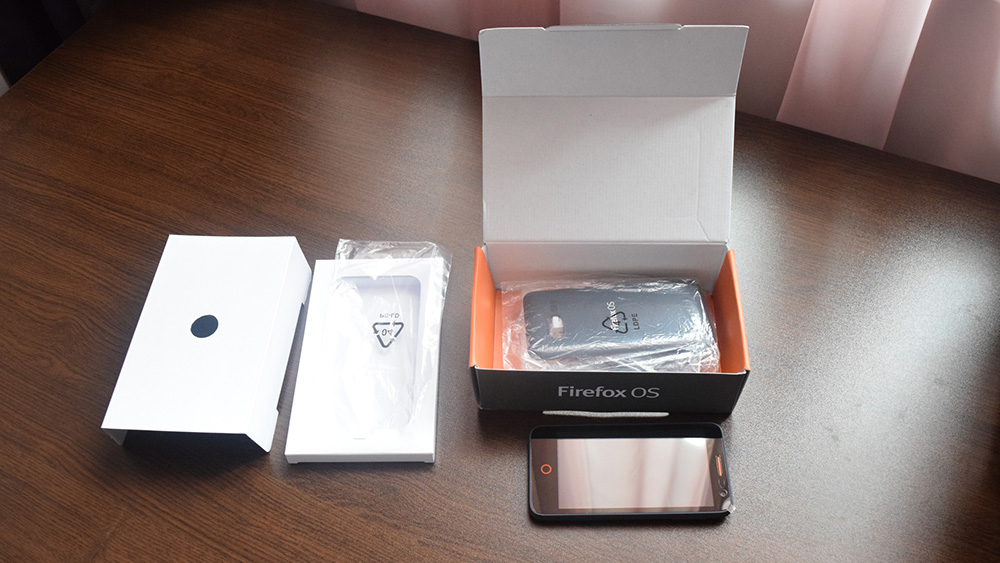 The bottom half of the box contains the phone’s back cover, micro-USB cable and earphones (quality not tested). 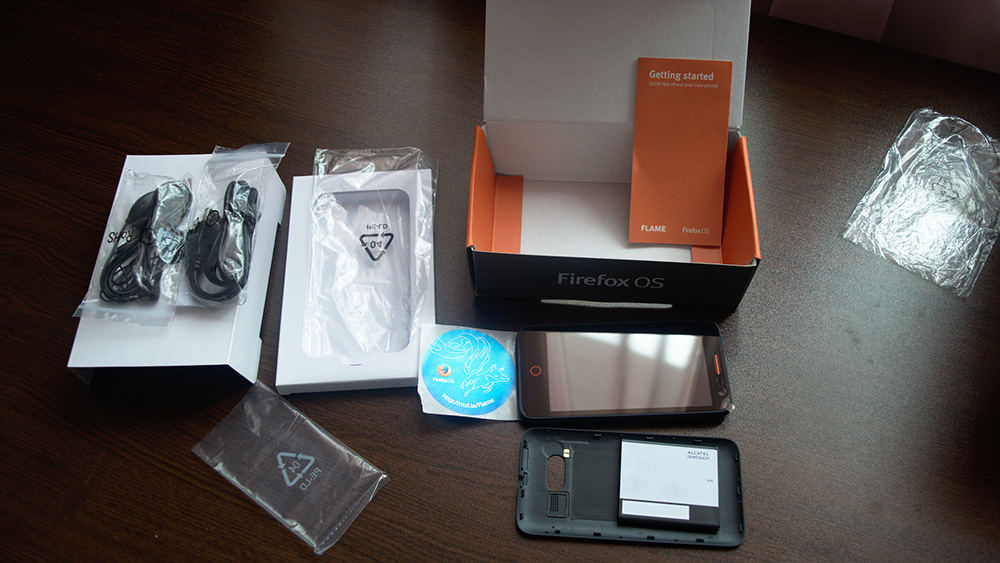 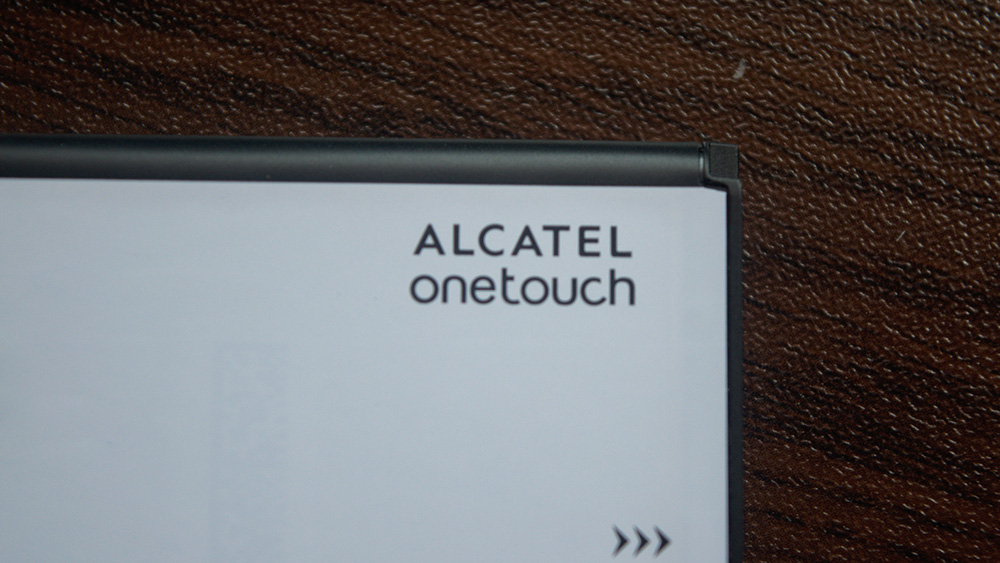 The full contents of the box. The Firefox OS sticker is a nice addition. 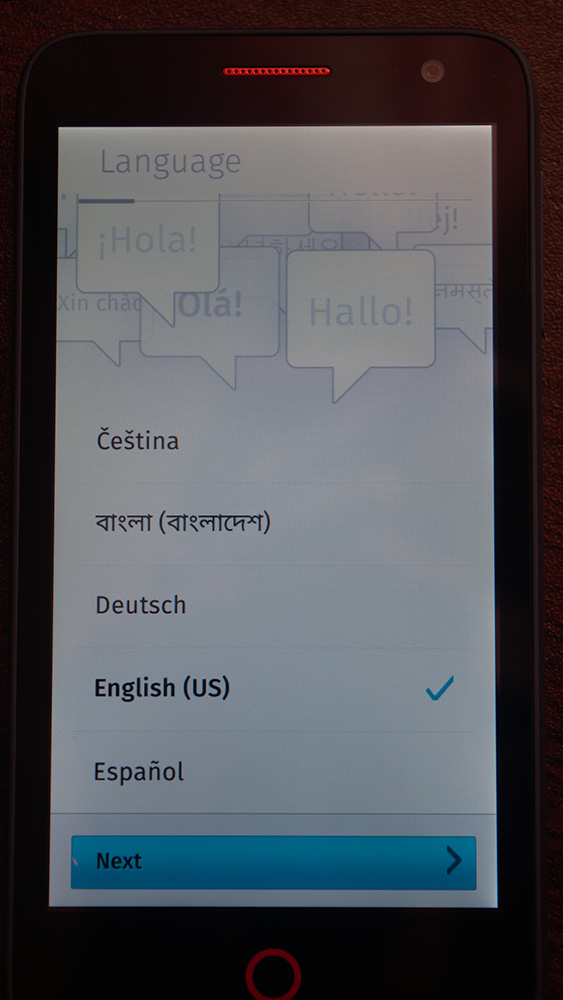 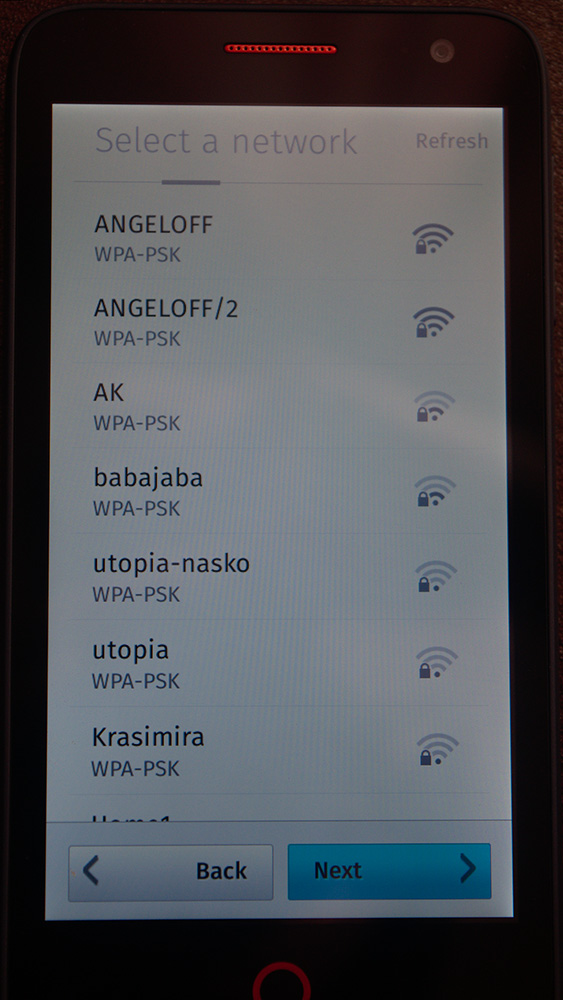 With the battery in place, I accidentally held the phone at the top which prompted a boot. The OS was fairly quick to start (and so are subsequent reboots). The first-time use screens prompt to select a language and a wi-fi network. English (UK) is not an option. 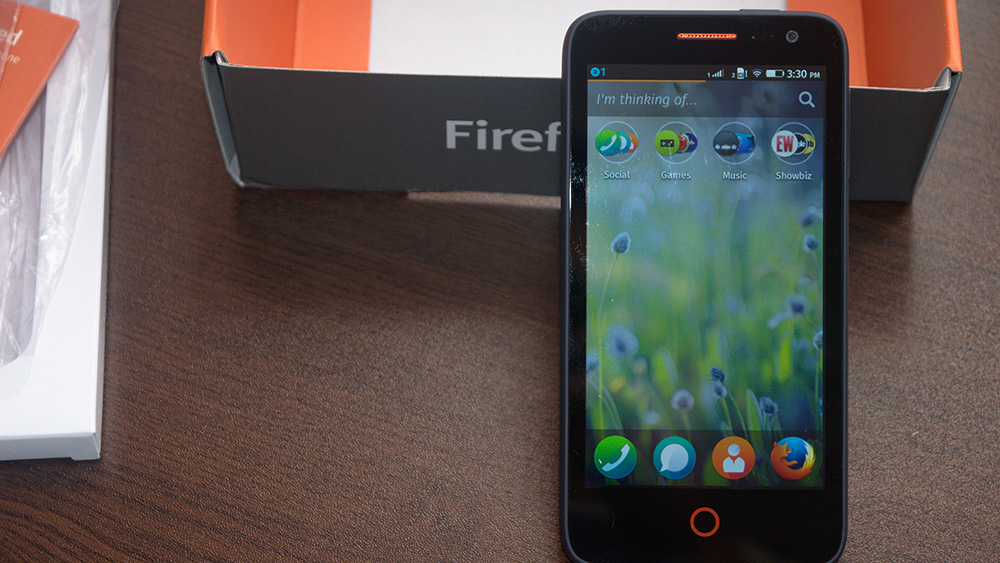 …and there we have it, a working Firefox OS on a Flame phone. Time to set up mail, calendar, contacts and all the social goodies one is accustomed to.